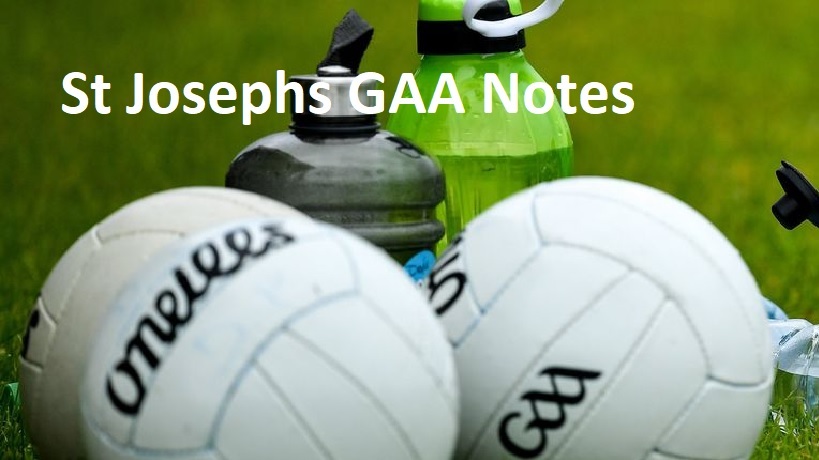 With both sides already qualified for the knock out stages coming into Sunday’s game at Killucan, it was hard to know what way both teams would approach this game. In a very tight opening half, St Josephs and St Pauls battled it out in a very competitive encounter but once St Josephs hit the afterburners early in the second half, the game became very lob sided as we ran out easy winners. Going on the results in the Senior B side of the draw, it looks likely that we will play Mullingar Shamrocks in the Quarter final on the weekend of the 10/11th September. This will be confirmed during the week. The match saw Ross Elliffe get the games opening point inside the first minute before a Jordan Mc Donnell free in the 7th minute put us two up. St Pauls hit back with a goal in the 9th minute as they hit the lead for the first time and they moved two ahead with a successful free after 11 minutes. A rapid response saw St Josephs fire over two points inside a minute to level the game before St Pauls hit back with points in the 15th and 20th minutes to lead by 1-3 to 0-4. Ross Elliffe was on hand in the 23rd minute with our first goal which saw us move in front again by 1-4 to 1-3 with the sides trading scores up to half time, we held a slender 1-6 to 1-5 lead at the break. The game changed utterly on the resumption as we got the run on our opponents. 1-2 inside the first two minutes, the goal being finished by Ben Mc Donnell from a move started by full back Alan Farrell. A further 1-2 between the 8th and 12th minutes killed off the game as we moved 3-10 to 1-5 ahead. St Pauls got their first point of the half after 14 minutes but in the final quarter we outscored them by 8 points to 1 to run out comprehensive winners by a margin of 17 points. It was great to get back to winning ways after the narrow loss to Multyfarnham two weeks ago and with four wins from five games, we have been very consistent so far in the championship. Next game is knock out so if we want to reach a first Junior semi final in 18 years, then we will have to be at our best. No easy games from this point on.

Two games at underage level this week with the Under 15 and Under 17 teams in action. The Under 15’s played Cill Oige in Castledaly on Monday 22nd August and lost out but will qualify for the quarter finals which will be in a couple of weeks. The Under 17’s had a back fixture on Thursday 25th August against Coralstown Kinnegad in Kinnegad. We led by a point with just over five minutes left but two late goals saw the home side win by 2-10 to 1-07. This coming week, we play Cill Oige on Monday 29th August at Under 17; the Under 13’s play Caulry in the Quarter final on Wednesday 31st August while the Under 15’s play Multyfarnham on Friday 2nd September in their Divisional quarter final. All games are at 6-30pm

Yearly Lotto is now due:

Subscriptions for the vast majority of Yearly lotto’s are due during the month of September. All who are due will be contacted with a grace period of the draws of 4th and 18th September being allowed to all subscribers. Anyone who has not renewed by the end of September will not be included in future draws. The fee remains at €50 for one set of lines and €100 for three sets of lines. Payment can be made to any committee member or by direct payment through club zap by the following link https://stjosephsgaaclub.com/categories/lotto/products

This year’s Scor competitions commence with Senior Scór. Westmeath will be holding their county final on Saturday 8th October in The Downs. St Josephs have entered in Senior Scór every year since 1984 and we hope that some effort can be made to have at least a couple of entries in this years competition. Please contact club secretary Aidan Walsh at 0863992403 if interested. Competition is open to all members who are over 17 years of age at 1/1/2022.