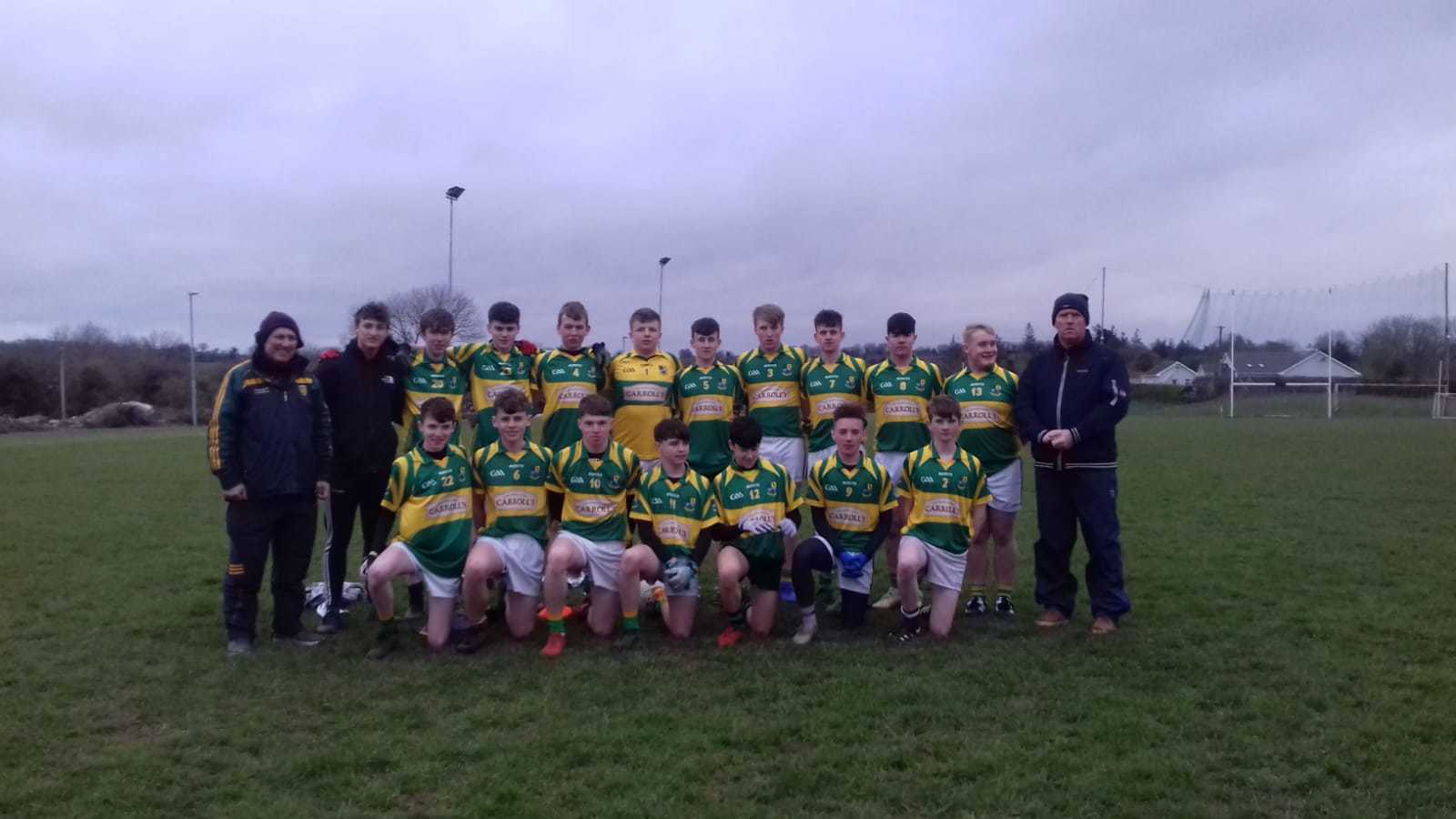 St Joseph’s Senior Footballers made the short trip over to Castledaly on Sunday morning to play in the fifth round of the league seeking a fourth win in the competition. On this occasion however, it didn’t work out as the home side held sway with a 2-11 to 1-08 win in a game played in atrocious weather conditions. St Josephs had a slow start to the game and lost keeper Andrew Meares with an injury early on. The defence played well throughout and though the result didn’t fall out way we had chances with a saved penalty and a shot off the upright which may have yielded goals at vital stages in this game. Next game will be a home fixture against Ballynacargy in two weeks’ time in what is a very tight Division which we still lead.

Not for the first time and hopefully not for the last time, St Josephs were represented in the All Ireland Scór finals which were held in Castlebar on Saturday 13th April. St Joseph’s took the field along with 28 other counties in the Table Quiz final which was held in St Gerald’s College and in a highly entertaining final our team of Darragh Fallon, Aidan Walsh, Dick Stokes and Johnny Hannify were in contention throughout before finishing joint fifth on a score of 63 marks out of a possible maximum of 80 marks. Third two years ago, the guys were not in the medals this time but have been remarkably consistent since the table quiz format came into being in 2014 having never been outside the top six each year. The winners on the day represented the Churchill club from Kerry and they are a marvellous outfit who retained the title they won last year. Well done to Darragh, Aidan, Dick and Johnny and who knows perhaps in 2020, the Joeys will regain this title.

Three teams were in action during the week with the Under 10’s, the Minors and Under 14’s all in action. Eighteen Under 10’s made the trip over to Milltownpass on Tuesday 9th April to take part in our first blitz of the year and performed very well on the evening. The Minor team made the cross-county journey to Delvin on Wednesday 10th April to play Delvin/St Pauls in the second round of the Minor league. With confidence high after the opening round win against Tyrrellspass, St Josephs had far too much in hand over Delvin/St Pauls to win by 8-24 to 0-4 in a very one-sided game. The weeks activities finished on Sunday evening with the Under 14’s playing Mullingar Shamrocks second string in the Community field. The 14’s were far stronger than their opponents and wrapped up a 5-17 to 1-3 win.

Underage training for our U6, U8 and U10 Boys and Girls continues this Friday the 19th of April at the new time of 6.45pm to 7.45pm at the community pitch Streamstown.

We are running our Annual Golf Classic on Saturday 11th May in Esker Hills Golf Club. In supporting our event, you would be helping to support our GAA club which caters for a large section of the community from Under 6’s to Adult level to play Gaelic Football in a positive, friendly and inclusive environment. Entering a team of 4 will cost just €160, refreshments will be served on the day and it is always a great social event. If you need any further information you can contact Billy Kelly (Club Chairman), Aidan Walsh (Club Secretary) or Anselm Conlon (Club Treasurer)

Our Recent Lotto took place on Sunday night in The Beech Tree, Streamstown. Numbers drawn were 8, 19, 21 and 27. We had no Jackpot winner with just one match 3 winner in Gary Ledwith, Streamstown. Our Jackpot remains at €10,000. How do you win? you buy a ticket!