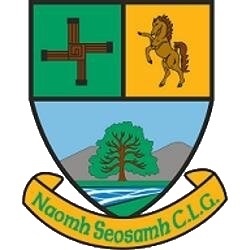 Behind by five points six minutes into the second half and having played with the hill and
wind in the opening half at the Community field, a win seemed highly unlikely against
Ballymore in the league on Sunday 24 th March. But, games change and sometimes in
adversity a team can shine and that’s what happed with Sundays league game. St Joseph’s
went two men down to red cards after a brief altercation which also saw one Ballymore
player red carded but it proved the catalyst for a remarkable final quarter which saw us grab
two valuable points. Ballymore started the game well with a pointed free inside the opening
minute which was quickly responded to with a Jordan Mc Donnell point in the second
minute. With wind advantage, St Joseph’s quickly ran up a 0-4 to 0-1 lead before two
pointed frees saw Ballymore come back into contention by the 14 th minute. The visitors then
got a goal when a parried save by Cathal Boland was fisted to our net to put Ballymore two
ahead after 16 minutes. Andy Scally pointed two minute later to reduce the gap, but
Ballymore were playing well with some nice close control and added on two further points to
lead by 1-5 to 0-5 at half time. The second half saw Ballymore push on at the start with three
successive points to move 1-8 to 0-5 in front by the 6 th minute of the half as we struggled to
gain any foothold in the game. However, a good finish from Dean Slevin in the 9 th minute
followed by another point in the 11 th minute brought gap back a bit. The game got heated in
the 15 th minute with two St Josephs and one Ballymore player seeing red so it was now 13 v
14 as the game headed into the final quarter. With a reshuffle of players on the field and
some good work outfield from Brian Killian, Alan Farrell, Eoin Kelly and Andrew Conway we
started to click. The turning point came in the 21 st minute when Ross Elliffe crashed home a
goal from close range following some good work from Dean Slevin in the run up. It was now
1-8 to 1-9 and though Ballymore fired over a point in the 24 th minute to move two ahead it
was St Josephs who finished stronger with points in the 26 th ,28 th and 31 st minute winner from
Niall Moran. Following on from the loss two weeks ago against St Lomans, it was vital to
rebound today with a win and in what is a very tight Division, it is vital to take home wins and
try to pick up a couple on the road also. Next match is away to The Downs on Sunday 31 st
March at 11-30am.
Team: Cathal Boland, Brian Killian, Jerry Gleeson, Andrew Conway, Tommy Moran, Brian
Fitzgerald, Eoin Kelly, Aaron McDonnell, Brian Keegan, Niall Moran, Dean Slevin, Daire
Lynam, Jordan McDonnell, Ross Elliffe, Andy Scally. Subs introduced: Alan Farrell for Daire
Lynam, Daire Lynam for Eoin Kelly (both in second half)

St Josephs Under 14’s picked up a second successive win at Under 14 level when having
too much in hand over Maryland Tang at the community field on Sunday 24 March 2019.
The game was tightly contested in the early stages, but St Josephs were much more clinical
and led by 3-4 to 0-3 at half time having played into a strong wind. The second half was
quite one sided as we ran up a big score to win by 5-16 to 0-5. A good win but there will be
much harder tasks ahead. Thanks to Maryland Tang for the game which was a cross over
fixture as we are in different sections of Division 3.

No fixtures this week but plenty of games the following week. St Joseph’s play Kilbeggan
Shamrocks at Under 16 level on Monday 1 st April at 6-15pm in Streamstown. On Tuesday 2 nd
April we play Cill Oige in Streamstown at 6-15pm. We host Tyrrellspass at Minor level on
Wednesday 3 rd April also at 6-15pm while we then play Mullingar Shamrocks in the Under 14
leagues on Thursday 4 th April with this game also at home at 6-30pm. The pitch is going to
be very busy indeed during the first week of April

Underage training will start back for our U6, U8 and U10 Boys and our U8 & U10 Girls this
Friday the 29th of March from 6.30pm to 7.30pm at the community pitch Streamstown. Hope
the weather holds up and we can start another great year of underage training in the sunshine.